Indonesia and Libya: The Partnership for Creating Energy Market Stability and Security in Asia Pacific
A Case for building an Energy Hub between Africa's Oil Producers and Asia Pacific Market.
by Jaya Wahono, Executive Director of Libyan Indonesian Business Council 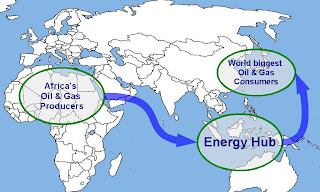 Libya as Gateway to African Crude Oil
Although Africa has long been known to be rich in oil, extracting it hadn't seemed worth the effort and risk until recently. But with the price of crude oil skyrocketing, and advancing technology making reserves easier to tap, the region has become the scene of a competition between major powers. Already, the United States imports more of its oil from Africa than from Saudi Arabia, and China, too, looks to the continent for its energy security. There is the sheer speed of growth in African oil production, and the fact that Africa is one of the world's last under-explored regions will make Africa even more attractive for Oil Companies. In a world used to hearing that there are no more big oil discoveries out there, and few truly untapped reserves to look forward to, the ferocious pace and scale of Africa's oil boom has proved to be an incentive. One-third of the world's new oil discoveries since the year 2000 have taken place in Africa. Of the 8 billion barrels of new oil reserves discovered in 2001, 7 billion were found there. In the years between 2005 and 2010, 20 percent of the world's new production capacity is expected to come from Africa. Almost 50% of Light Sweet Crude oil also come from Africa.
Libya, which has been confirmed by International Energy Agency as a country with the continent's largest oil reserve will likely play a crucial role in African oil production & development in the near future. This proven and probable reserve will certainly attract Foreign Direct Investment (FDI) to Libya and create a unique opportunity for Libya to realize its aspiration as Gateway to Africa. Libya's position as Gateway to Africa will then have to be determined by its effort overseas in securing supply and share participation in the construction of new oil refineries in emerging economies such as the ones in Asia Pacific.
Geopolitical and Geo-economical Aspects of Regional Gateways
The status of world oil reserves is a contentious issue, polarized between advocates of peak oil who believe production will soon decline, and major oil companies that say there is enough oil to last for decades. While there is certainly vast amounts of fossil fuel resources left in the ground, the volume of oil that can be commercially exploited at prices the global economy has become accustomed to is limited and will soon go into decline. The result is that oil may soon shift from a demand-led market to a supply constrained market. The capacity to meet the services provided by future liquid fuel demand is contingent upon the rapid and immediate deployment of production equipment and manpower, more efficient oil distribution network, as well as increased oil refining and end-product processing capacity that is closer to market. Significant supply challenges in the near future are also compounded against a backdrop of rising demand in developing countries and strengthening environmental policy. Therefore, the pressure for Oil & Gas Industry around the world to be more efficient and compliant to the market demand and stricter regulation is increasing.
By the 2030s, oil requirements could go from 86 to 118 million barrels a day (MBD). Fossil fuels will still make up 80% of the energy mix in the 2030s, with oil and gas comprising
upwards of 60%. The US Department of Defense has issued a Joint Operating Environment Study early this year which underlined the importance of oil production and distribution management by saying: ”The central problem for the coming decade will not be a lack of petroleum reserves, but rather a shortage of drilling platforms, engineers and refining capacity. Even were a concerted effort begun today to repair that shortage, it would be ten years before production could catch up with expected demand. A severe energy crunch is inevitable without a massive expansion of production and refining capacity.” 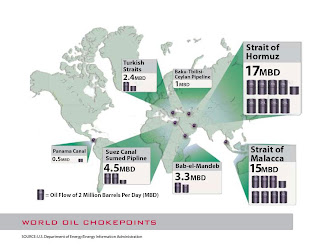 It is now well understood by all governments around the world that the age of cheap liquid fuels is over. Consequently, a condition of meeting additional demand from high growth market such as China and the rest of Asia Pacific could only be done by developing better management on the rest of the world's limited production capacity and distribution network, which should translate to an improvement on the oil & gas midstream & downstream infrastructure sector, especially around the “World Oil Chokepoints” (see the map above). Therefore, it is for the International Trade interest when the regional gateways such as Indonesia and Libya come together to improve this strategic infrastructures. 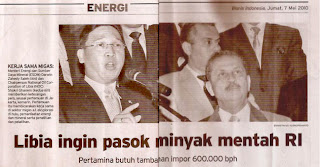 This strategic collaboration has shown some shape when the head of NOC Libya, DR. Shokri Ghanem visited Indonesia early 2010 and announced that the Libya was planning to supply crude oil and to invest in the construction of a new refinery in Indonesia. The latest announcement from DR. Ghanem suggests that the potential for growth in Indonesian refining capacity, combined with the increasing potential for incentives from the government, has proved attractive to Libya. While the benefits of foreign direct investment and a reliable source of feedstock for Indonesia are very clear, Libya also stands to gain significantly from the deal. NOC's overseas branch Tamoil is highly exposed to the declining European refining sector, with refineries in Italy, Switzerland and Germany. With much higher growth prospects in Indonesia and Asia Pacific, involvement in the refinery project there would re-balance its refining portfolio towards emerging markets.
In addition, Indonesia's trend of processing a heavy range of crudes could benefit Libya, which produces a number of heavier crude oil such as Al-Jurf and Bouri. Increasing the country's involvement in Indonesia could therefore provide Libya with a chance to secure
a large and growing market willing to purchase its less desirable crude blends. In addition,
DR. Ghanem told the reporters that Libya was interested in inviting Indonesian companies
to provide services related to refining, construction and geological engineering in Libya.
Libya's interest in inviting Indonesian companies signal its desire to find a trusted partner in improving their technical and management capacity in order to develop its energy resources and the rest of Africa's down the road. Therefore, a close cooperation between Libya and Indonesia would not only benefit their respective economies but also enhance the competitive advantage of their respective regions.
Connecting Africa's Crude Oil with its High Demand in Asia Pacific
At present, the United States possesses approximately 250 million cars (approx. 1 car per 1 person), while China with its immensely larger population possesses only 40 million (approx. 1 car per 25 people). But, the Chinese are laying down approximately 1,000 kilometers of four-lane highway every year, a figure suggestive of how many more vehicles they expect to possess (about 1 million cars are added to Chinese roads every month), with the huge rise in their demand for oil. And, as more and more of their people get richer – buying cars, air-conditioners and white goods for the first time – per capita oil use in China is growing faster still.The presence of Chinese oil companies all over Africa also underlines China’s concern for securing its oil supplies and could intensify a fierce competition from other emerging economies to enter in Africa to protect scarce resources. It is obvious that oil production and distribution infrastructure must see significant new investment if oil demand is to be satisfied at a cost compatible with economic growth and prosperity. 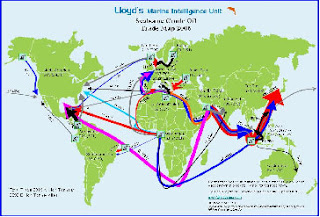 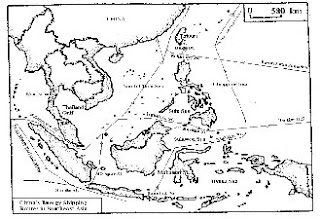 Other alternative sea-routes are also passing through Indonesia's territory, namely Strait of Sunda and Strait of Lombok (see picture above). Indonesia's role in securing oil supply into Asia Pacific market in the future should not be limited to providing access for its sea-route only, but also providing higher added value activities such as Oil & Gas downstream processing, petrochemical complex and storage facilities, which should lead to a creation of an Energy Hub for Asia Pacific region. The only feasible way to realize this vision is by fostering a close cooperation with oil exporting countries. Since that China is getting more active in securing African oil fields rather than the ones in middle east in order to fuel its economic growth, it is logical for Indonesia to foster close cooperation with African oil exporting countries, such as Libya.